Lots of things started in our family last week.

Daryl and Victoria even gathered wild plums from the banks of Plum Creek yesterday.  How cool is that?  🙂

I’ve been drying trays of elderberries for a week and now I’m searching for ways to best use the plums quickly, too.  (Since starting this draft this afternoon, I’ve made one batch of Young Country Wine with them! I’ll report back on how that turns out.)

Daryl’s parents have more apples than they can use, so he headed out there and gathered four bushels of apples to process.  One bushel’s worth has already has been processed and two big pans of apple crisp are in the oven as I type.

I also traded some apples and dried elderberries to a friend who had extra backyard plums.  Aren’t they the most beautiful plums you’ve ever seen?

Victoria also started her new job.  She did training on Thursday and she’s been working every weekday since.  It will go in spurts when her supervisor is in our part of the state, but he plans to do a lot of work around our area for a while.  Her first paycheck should be awesome.

In other new beginnings, Rhia (Anna) has her first boyfriend.  Eek!  She’s fifteen  now.  He’s sixteen.  I am probably not allowed to say any more.  🙂

And then some old traditions were continued…

Daryl and the boys took part in the Old Time Medicine Show at the historic Hubbard House in Mankato.  Daryl played his riverboat gambler character and also taught the audience how to play the spoons.  Alex and Jack played old time pickpockets and helped our wonderful friend Susan run some old time medicine show swindles.  🙂

It was a wonderful day and we had such a good time with wonderful friends.  I love taking part in living history events, not just because of all the kids learn but also because it’s quite simply just fun.

I also love that one of my kids’ best friends is a 60-something year old lady who dresses up and plays in the past at so many of the same events with us.  One day she’s having my boys swindle her audience with her medicine show scams (they’ve been cured of worms more than once with her diabolically clever pills!) and the next day she’s a temperance lady dressed in black, hollering at my poor husband to take his gambling and boozing elsewhere.  🙂

Lots more has been going on — bowling and billiards at a birthday party, a new box of books… lots of things that start with B, I guess.  😉  And more.

I’m starting to do my fall planning and I hope to get a tentative schedule figured out.  It will be very loose and organic, as always.  I’m excited to get into some new topics with the kids, though, and see what the new season brings.

I thought it was about time for a check-in!

It’s a dreary Wednesday here, the third rainy day we’ve had in a row.  The cold and wet has actually been rather nice, since it was so hot and dry for so long.

I haven’t had to water the garden.

There’s no need for air conditioning.

I can cook without making the kitchen unbearably hot.

We can cozy up inside.

It’s kind of nice, as long as it eventually gets back to a bit of summer before fall hits!

Daryl and Victoria are out gathering elderberries during the break from the rain. 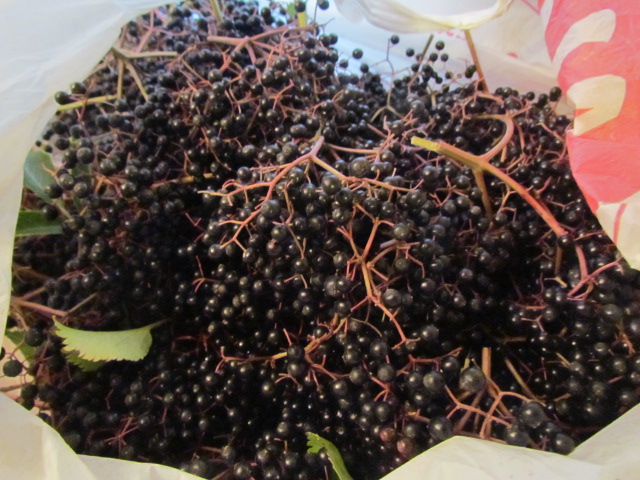 I’ve spent the last 3 days drying three trays-full that Rhia (our Rhiannon Lee no longer goes by Anna or Annalee, but Rhia these days) gathered for us Sunday.  She climbed down into a very deep ditch near our rural UU church to gather them, and a hummingbird mistook her bright pink hair for a flower and kept whirring alongside her!  🙂 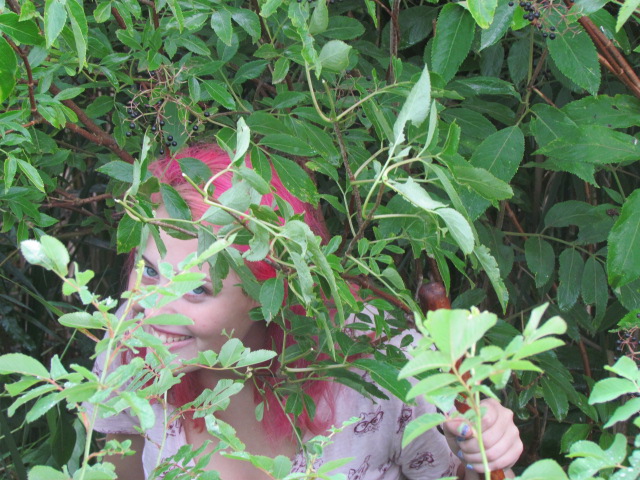 I have one quart jar and one pint all safely filled with dried elderberries that we’ll use for the best anti-flu remedy in the world, elderberry syrup. (Daryl has info on how to find elderberries and harvest them in his foraging column, if you want to get some in your neck of the woods, but honestly the easiest time to find them is when they’re in flower and you see them all over — this is what that stand looked like six weeks ago and how we knew to send Rhia down there this week!.)

Jack is taking a break from the story-writing that has consumed his past week in order to watch Fiona for a few minutes.  I love how he’s thrown himself into this book, and how he comes to Daryl for help in correcting the capitalization and punctuation to make it perfect.

This is his second draft of this book, since he worked on it for three days straight and then accidentally deleted the entire first draft and replaced it with the word “barbarian.”  He was trying to look up the spelling and somehow not only copied over his whole manuscript but closed the program in panic, leaving us unable to save him by undoing it.

It’s going to be a very long time before he sees the humor in that!  Poor kid.  🙂

On the bright side, he now does admit that I was right when I told him the second draft would be even better.  Even though it’s so much frustrating extra work, I promised him that second drafts are almost always better.  Luckily, he concurs and he’s once again happy with his book.

Alex is copying a page of sight words I wrote out for him in his homeschool journal.  I’m rewarding him with two chocolate caramel cups.  I’m okay with that.  🙂  Writing doesn’t come easily for him so I’m going to stock up on some fun ways to help make it easier, as I’m sure he doesn’t want to do copywork every day for the next months even for chocolate.

Here are some of my favorite ways to make writing come easier:

Victoria and Daryl took part in an acting workshop last night.  They went to Mankato and she spent some time with a friend of hers first.  They learned how to do convincing slaps, punches and foot stomps, for one thing, and they’ve had fun teaching Fiona and Alex how to do the same.  Fiona doesn’t quite get it, and keeps actually punching people in the stomach.  😉

Victoria also has a new job that she’ll start soon.  I can’t say too much about it, but it’s a government job and she’ll be picked up in one of those shiny black government SUVs every day that she works (which will be for about a week each month, during the day). She’s very excited and will start training soon.

We have our first monarch chrysalis in a habitat on the piano, with two more caterpillars happily munching on milkweed leaves to “J” soon.  It’s exciting to raise butterflies again after a couple of summers off.  (Here are some pictures of the process from one of our earlier years.)

Otherwise, things are going well. Alex has a new best friend who lives a block over that he spends most hours of sunlight playing with. They are pretty much always at each other’s houses — either she’s playing with our kids in our yard, or he’s over at her house.

He also has a best friend at church who he is happy to get to see again (our church doesn’t have service in the summertime, which I guess is an old UU tradition).

He’s been doing a lot of reading and bike riding, too, along with lots of the usual building and playing and watching science documentaries.  Toria and Rhia have both been spending lots of time with friends who live in nearby towns, and lots of time reading and studying.  All three “big” kids are doing math online through sites like Khan Academy, and Toria is also still learning German on Duolingo.  Rhia has been reading poems to Fiona (particularly Edgar Allen Poe).  Everybody reads to Fiona and takes turns watching her, playing with her, drawing with her and keeping her happy.  I love how the older kids dote on her, and how she is such a reflection of every one of them!

We’ll officially start homeschooling next week.  You know we are never “school at home” types, but we’ll start doing more projects and unit studies.  I’m once again committing to doing country studies every week.  I know I won’t get to anywhere near all the countries I want to, but it’s fun to plan.  😉  I’ve also made a list of 60+ different topics I’d like to cover with the kids this year, and that’s before asking them to add theirs!

And while typing this, Daryl and Toria came home with a bucket full of elderberries to process, Alex finished his copywork and wants me to check it, and the sun came out.  I went outside and it felt absolutely marvelous on my skin.  I guess I can deal without rain for a while after all!

I’m going to grab a towel to put down on a lawn chair, dole out some chocolate cups, and invite my kiddos to play outside with me.

What’s new in your homeschool?