Victoria and Rhiannon each took a bit of a field trip yesterday.  They participated in the #WomensMarch in St. Paul (Minnesota), along with roughly 100,000 others (and several million around the world).  🙂

Victoria went with a charter bus from New Ulm, a city about an hour from us, and Rhiannon went with a friend and some of her friends and their children in a van that left from Mankato.  Poor Daryl had to leave at 5:30 a.m. with them to get them to their respective drop-off points so they could get up to the march in time.

They both had phenomenal times, to say the least.

Rhia stayed up late the night before embroidering feminist statements on her jacket.  I’ll have to get a picture of some!

(I gave Toria that hat for Christmas.  Wasn’t it perfect for the day?)

It was a profoundly empowering experience for both girls, and Toria called it one of the coolest experiences of her life.

I’m very proud of my girls (and all who marched around the world!).

My Kindle book went live on Amazon this morning! 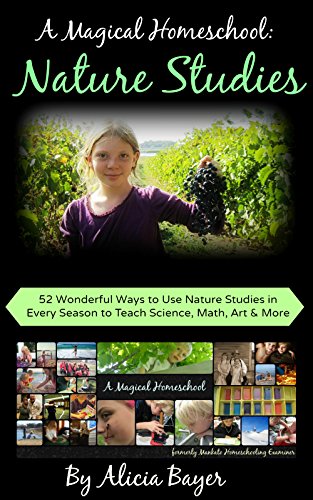 You can find it here: A Magical Homeschool: Nature Studies (52 Wonderful Ways to Use Nature Studies in Every Season to Teach Science, Math, Art and More) (affiliate link).

This is utterly terrifying new territory, but very exciting nonetheless.  🙂

It’s broken down into four seasons, with 13 activities for each season (enough for one every week of the year).  They are designed to work with multiple ages, so families can do the activities together.

Examples of the activities include:

It’s $2.99 in the Kindle store, or free if you subscribe to Kindle Unlimited.  It should be free sometime soon and I’ll post and let you know when that happens.

(Yes, our kitchen ceiling is completely covered with the children’s art!)

We had some more sadness, as my grandmother died right before the new year.  She was 93 and impatient to move on to her next adventure, but that doesn’t make it easier.  I am very glad that we made so many trips to Ohio for the kids to really get to know her, especially this year (3 trips in 6 months).

That doesn’t mean homeschooling was happening, though.  Or magical moments.  Here’s a bit of what we’ve been up to lately.

And now, I’m off to work on that cover and pretend I’m going to get housework done.

Okay, really try to at least get a little housework done….

Have a magical week!